Arribes: This Is Also The Future

(This is the English translation of El futuro también es esto by Estefanía Vasconcellos in the Spanish national newspaper El Mundo.)

How exotic to see a pig being cut open with its intestines still hot and steamy. The smell cannot penetrate the screen, but anyone who has witnessed a pig slaughter knows how thick and warm it is, blending in with the stench of scorched skin. How awful to see a knife stuck in the pig’s throat, bleeding into a bucket to be used for blood sausages, and then its innards being pulled out.

But it need not be looked at in that way. Unless you are a vegetarian, you eat meat, although perhaps unaware of what happens to an animal from the moment they are born until you see them as sliced meat in the supermarket. One day they are grazing in the pasture and the next day, zap! A Canadian portrays people still in control of the production of their own food from start to finish in villages in northwest Spain. Pigs and chickens do not die by themselves. “Sometimes it repels me, but I kill it anyway”, says a women with rosy cheeks.

It is quite rare these days to see farmers who work their land and raise livestock for their own consumption. The few who are left are getting old, and there is no generational change-over in the countryside. Too hard, and perhaps too rustic. Modern territorial management is not helping either with its encouragement of urban concentration, centralizing services and production centres where work can be found. Between 1939 and 1975, the rural exodus was overwhelming, and although migration has decreased since then, it is mainly because there is hardly anyone left.

By chance, artist Zev Robinson landed in Arribes del Duero, going there to get footage for a documentary about Spanish wines, but other stories caught his eye, such as people who never owned a tractor or car but plowed with mules, and a smuggler who used to cross the border with Portugal to make a living. Arribes, Sayago and Abadengo had lives that deserved to be known. 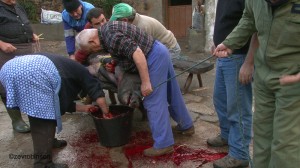 “Modern” rural life has everything we need today to preserve the planet – sustainable in its use of resources (people produce and recycle near where they live), organic (the land and livestock are treated in a traditional way), and natural (the food is fresh and seasonal). This is also the future.

“This is a geographically isolated region. People had to sustain themselves without any outside help,” explains a retired teacher. In Arribes, people produce 80 to 90 percent of the food they consume. This is a clear example of self-sufficiency, as opposed to Spain’s external dependence of fuel and resources.

Isolation and the disappearance of basic services such as schools or health facilities speeds up rural depopulation.

“When we have enough to eat, we want more and more, and end up by consuming ostentatiously, that’s the human condition. But when you have never had anything, you realise how precious the most basic things are. A pig can be eaten, a vegetable garden provides food, and a roof gives shelter,” says the filmmaker. A woman in the film sums it up, “Here we’ve had little, but a bit of everything”.

Not everything is peace and harmony here, points out Zev Robinson, who moved from London to a small town near Valencia. “It is a difficult life. People want easy jobs rather than looking after cows the whole day, a profession that people do not value.”

“Working hard to end up with nothing, that is what I have done all my life,” says an old shepherdess. From the age of twelve, she would spend weeks on end with her flock of sheep in the mountains. “What I really liked to do was to study” she says, but there were other priorities then.

On the other hand, thanks to new technologies one can now make a living in the countryside, as does Delfín Martín, an advertising executive who moved from Madrid to Sayago and now works from home.

The isolation and the disappearance of basic services such as schools and health assistance are causes for worry. Delfín points out another, less obvious factor, that “there are people who leave the village because of an inferiority complex.”

The film is not an argument for returning to the past, but a call to reflect. What sort of territorial planning do we want? Could we make life in the countryside more attractive in order to stop the depopulation? According to the Environment Department, rural areas make up 90% of Spain, but account for only 18% of the population.

“In order to bring more people here, legislation would be needed to encourage and promote urban decongestion. But Spain has promoted unbridled urbanisation,” says Esther Prada, an architect specialising in rural landscapes. “In order to redistribute populations and change their urban mentality, it has to be done using a specific territorial policy, not by crowding people in urban environments and promoting private transportation, housing developments, highway networks and big motorways.”

It is also a question of preserving history. “Here we have one of the few remaining medieval landscapes in Europe,” she explains, “that traditional rural societies have built and maintained with their lives and work.” Delfín Martín outlines two possible allies for the villages’ revival. The crisis which is forcing people to consider other options for work and living in less expensive places, and the technology which allows many to practice their professions using the Internet.

Despite everything, there are still people in rural areas who thinks progress comes with bigger motorways, he laments. However, there are also those who, after leading a simple life, are content with little, “May God give us good health during our time left on earth. Otherwise He can take us.”